Media Theory assignment:
These are the lyrics of a famous Arabic song titled [Jmohriat Albi]
This song has caused many debate between [extreme]/ feminists, Arab men and women.
Research about this song and its impact on the Arab society, watch the video clip here and then pick the most 5 disturbing ideas that were portrayed in this song...
Apply all the knowledge we have gained so far in this course especially theories of Semiotics and theories of Feminism.
The article should be around 700 words.

A song by Mohamed Eskandar titled Joumhoureyet Alby "The Republic of My heart" has caused Lebanese feminists to go on a couple of rallies to protest against the song and its messages. Both the lyrics and the video clip are embedded with messages against women rights and their freedom of choice.

The song starts off with the graduated girl telling her dad that she wants to work. Eskandar, playing the role of the dad bluntly states that "we have no girls here that work with their degrees, our girl is pampered and everything she wants is at her service." Now what does that even mean? Assuming that all families have the luxury to "pamper" their girls, is that what all girls are after? Not only it is demeaning to women's ambitions and goals in life, it also encourages them to being a non-productive part of the society. How on earth would the Arab world move forward while half of its population is being "pampered" at home?

It seems that the song aims at putting women in their "place", to Eskandar this place is the kitchen. We see the girl giving the man, who seems to be her fiancé, a look asking him to support her decision, but he starts shaking his head and waving his hands saying "you get married and that’s it". Now that’s the role women are supposed to fulfill according to the song. It simply undermines women's rights and intelligence.

Then the dad tells his daughter to hypothetically assume that he would allow her to work, what would he do with her with her beauty!? In the video clip we see the girl dressed in a very revealing dress that her boss couldn’t help but sexually harass her. The problem here is that the dad is going to have to intervene and destroy the office. "Take the idea of working out of your mind, why to cause yourself problems?" Assuming that a working woman would wear something like that to her work place, how is she to blame if one man is a pervert. The song is basically saying that all men are pigs and it blames women for that.

According to the song, another reason why women should stay in their kitchens is the kids. We see in the clip the woman going to work leaving her little son with the Asian maid that doesn’t pay any attention to the crying baby. Well, first of all, there's a lot of working women I know and none of them leave their kids with the maid. Second of all, the image that Asian workers are portrayed in the video clip is extremely racist. Third of all, if a mother is working it doesn't mean that she is going to neglect her kids or not care for them. Sure, a lot of women decide to stay at home when they become mothers, but that is their choice and a second class singer shouldn’t have a say in that.

In my opinion, the most insulting part of the song is when the father goes like "what is this job that’s going to separate us, who cares about money, I would burn them for your eyes". It's a bad stereotype that shows women would smile like dolls and do what you ask for if you buy them fancy things. Apparently it hasn’t crossed Eskandar's mind that women need to work to fulfill their dreams and ambitions, not just to earn some money. Furthermore, it would be great if all fathers can afford saying that and actually buying their girls convertibles and give them golden credit cards, but that’s just not true.

What's dangerous about this kind of messages that come in the form of catchy songs is that the words are easily implanted in the minds of kids and youth. How many of us sang and danced along such songs? Such messages lead to backward thinking thus hindering the Arab world from acknowledging women as a productive part of the society and becoming more of a civilized culture. I think there should be more special organizations to spread awareness about this kind of popular media and advertisement.
Posted by Rand at 12:17 PM 3 comments:

Its a silent, black and white short experimental film. I didnt put my own explanation so that everyone can have his or her own interpretation.

were facebook and other social networking sites created as a response to  society's needs or as a changer of the society's current social norms?
A lot of people might argue that social networks were created as a reaction to social changes and a response to people's needs. But can people really need something they didn’t even know exist? Nearly half a century ago, Raymond Williams said that a new technology "'emerges' from technical study and experiment. It then changes the society or the sector it has 'emerged'. 'We' adapt to it, because it is the new modern way." The Canadian communication theorist Marshal McLuhan also agreed that the media technologies are the tools used to 'shape' modern societies.  Thus all kinds of social networks were created as part of the process of evolution and consequently became a social norm.
Few years back, the idea of sharing private information on the web was completely foreign to most people. Then the rising popularity of some social networks reflected the changing attitude of people towards sharing and communicating. "People have really gotten comfortable not only sharing more information and different kinds, but more openly and with more people." said Mark Zuckerberg, the founder of facebook; the world's largest social network

The Truth about Facebook
Posted by Rand at 6:11 AM No comments:

"This was a found footage short exploring the concepts of death that I put together for my experimental film class at UT. I bought over a dozen 16mm films and edited them to accompany the narration of a suicide letter in order to create a short about life and death and the memories we will never forget. Music by Aphex Twin. Narrated by Daniel McNamara, my good ole' English chap."

Quote of the day

"Maybe it's not too late to learn how to love and forget how to hate"
Frank Zappa
Posted by Rand at 2:18 PM No comments:

Email ThisBlogThis!Share to TwitterShare to FacebookShare to Pinterest
Labels: quote of the day

Photo of the day: despair 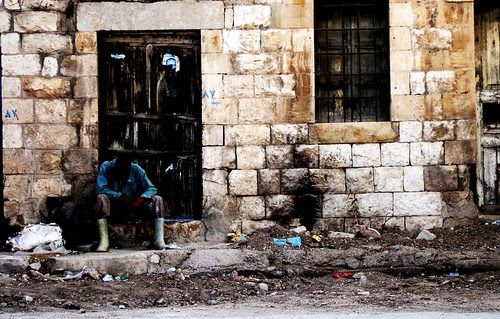 She was laying there in the dark, staring at the shadows overhead. Its half past twelve and the night is dark as the moon hides behind the passing clouds. At that moment it seemed to her that she's been laying there since ever as she lost track of time and place.

Swiftly, without any introductions, she got out of bed and looked at her reflection in the mirror. It felt like she is gazing into the eyes of a complete stranger. The sound of the rain drops tapping her window woke her up from that state of mind.
She heard the sound of a car stopping in the entrance of her house. It was him waiting for her outside. Her mind drifted back to the previous night when they agreed on eloping together. She tip toed her way out of the house.

Only the sound of the mighty thunderstorm broke the silence that fell upon them. Suddenly the lights of another car flashed into her eyes. Next thing she knew, the car was upside down on the edge of a deep cliff. She starts screaming and screaming… then she woke up!

As she lay there, it came to her like a tide flowing its fathom over her, it was all a dream

Rand
Blue Buttons is a space to organize and share my interests, inspirations and thoughts. It’s a blog about art, design, film, photography, media and culture.